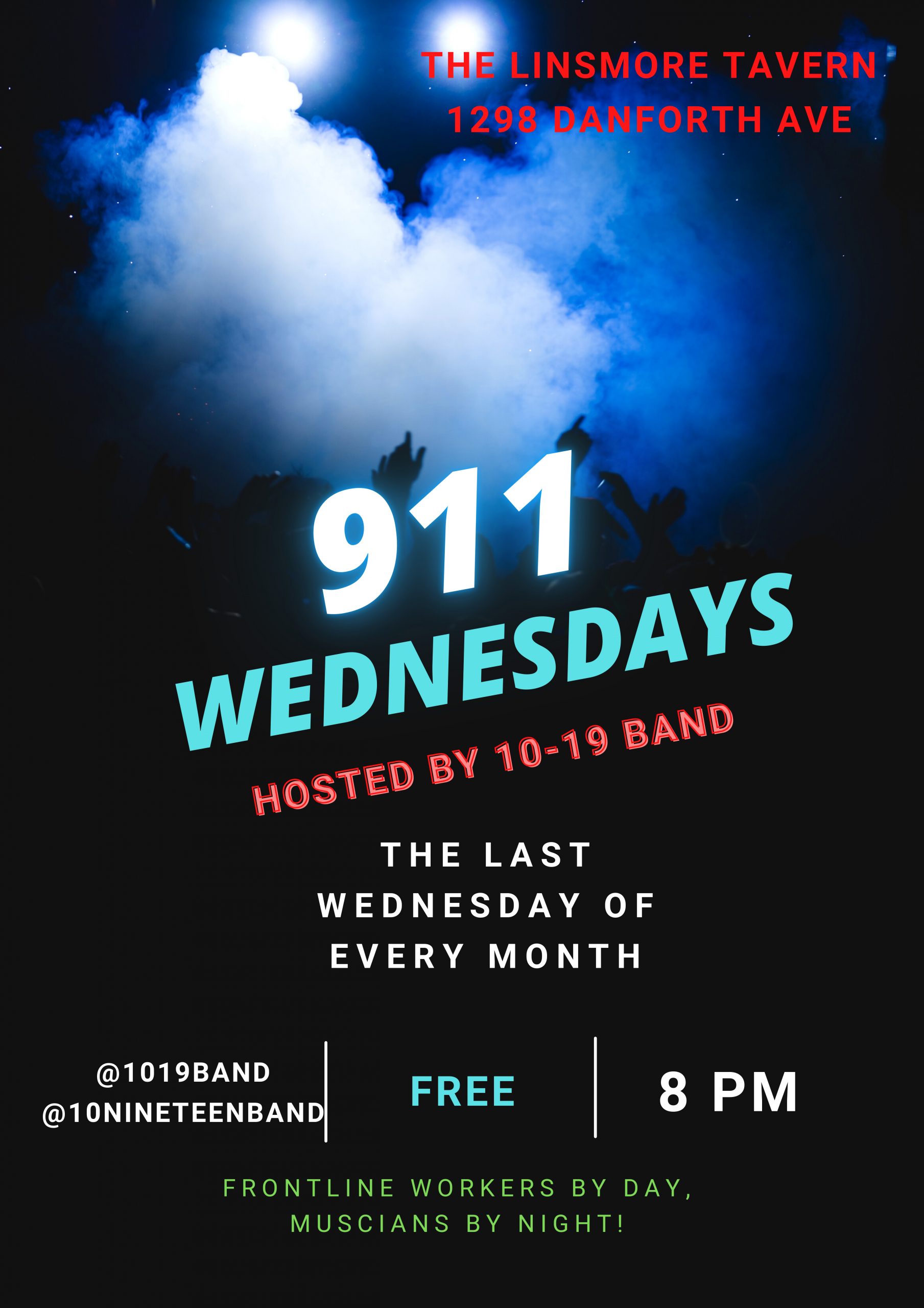 One of our most popular nights, happens to be every last Wednesday of the month, which is the new 911 night a monthly residency at the Linsmore Tavern (1298 Danforth Ave) with the 10-19 Band, featuring GTA Paramedics and Nurses! This month the new 911 Night goes down on Wednesday August 31! The 10-19 Band is a band featuring some of Toronto’s first responders who are some of the real heroes of our city! Get ready to party every last Wednesday of the month with GTA paramedics and nurses at the Linsmore Tavern, to some fun upbeat music from the 80s to now! There’s no cover and the night starts at 8pm!

Sarah Young (Emergency Room Nurse) and Billy Young (Toronto Paramedic) started their music relationship together in the early 2000’s playing acoustic covers at work parties and teaming with co-worker Morgan Jones Phillips (Toronto Paramedic and writer of The Emergency Monologues) performing with an original blues/rock band in the Toronto live music scene. In 2015 they were approached by a booking agent to start a cover band consisting of all front line workers. The three of them invited musician/Medics to form The 10-19 Band that year and headlined the first annual “Artist In The Ambulance” show at 3030 in the Junction. The “Artist In The Ambulance” shows continued up until 2020 and 10-19 also played other shows during their first few years together. Unfortunately and as with many live performers Covid-19 took its toll on the live music scene and also front line workers. The 10-19 Band is excited to announce the next phase in “front line live music”. Thanks to The Linsmore Tavern the current 10-19 line up is a 5 piece band consisting of original members bringing back their unique blend of cover songs old and new. With their powerhouse singers Sarah and Annie Tat (Toronto Paramedic), Billy (guitar) Morgan (bass) and drummer Jesse McArthur (Toronto CBRN Medic) The 10-19 Band is happy to be reunited with their dancing crowds like back in the day!  Every last Wednesday of every month the 10-19 Band will be bringing you covers from modern artist like the Lumineers and Vance Joy to 80’s or 90’s and everything in between.