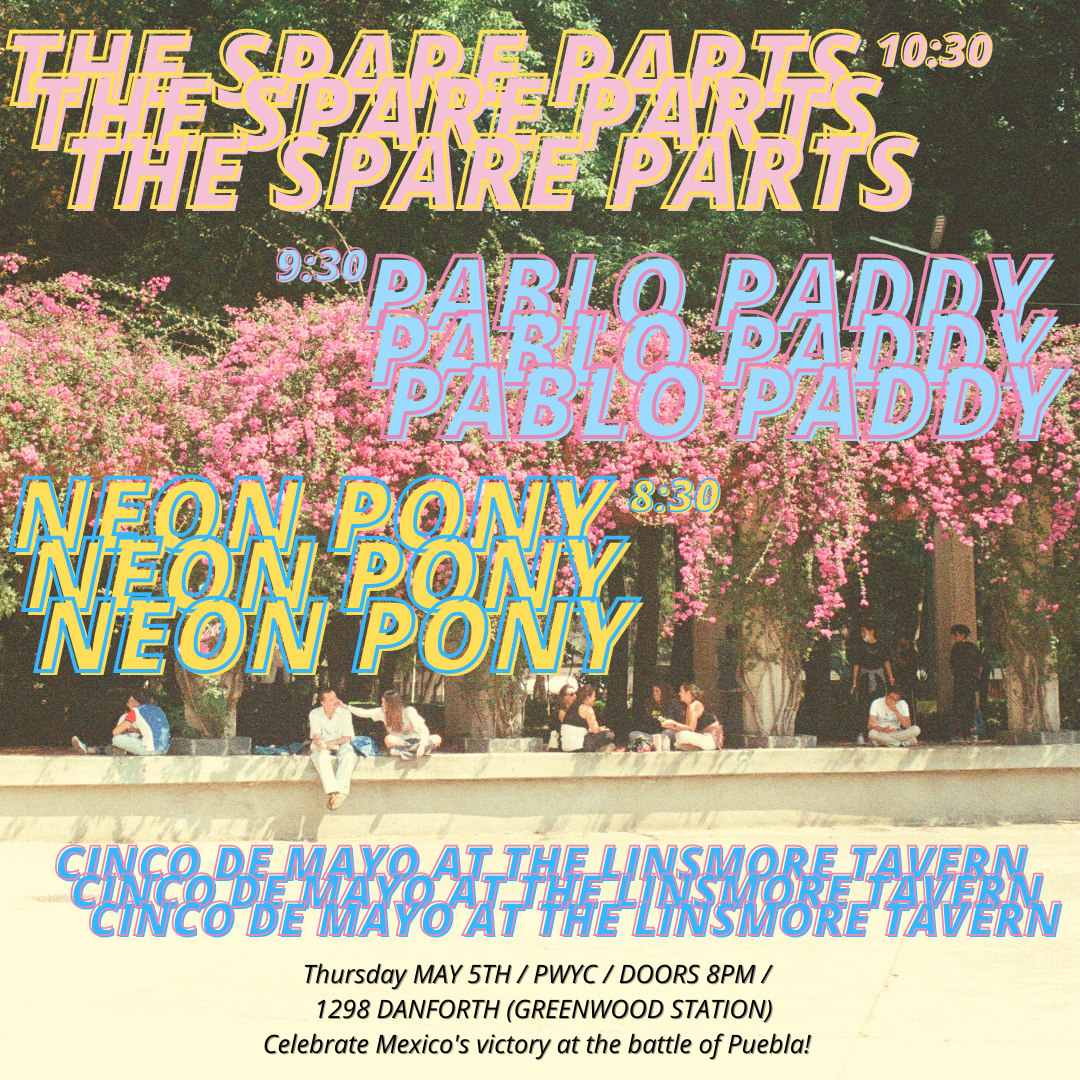 Neon Pony- 8:30 p.m.
Pablo Paddy- 9:30 p.m.
The Spare Parts- 10:30 p.m.
19+, PWYC, Cinqo de Mayo specials at the bar
Thursday May 5th, the Linsmore Tavern (1298 Danforth Ave), is throwing a special Cinqo de Mayo evening of music with 3 of the countries most talented original bands! Music fans, why not celebrate Cinqo de Mayo with these 3 incredible bands who will blow you away with their amazing music and talent! Kicking of the evening is Neon Pony, followed by Pablo Paddy and headlining the evening will be one of our favourites, The Spare Parts! The show starts at 8pm, there is no cover!
Neon Pony is a talented Blues Rock Duo out of Toronto! They have an incredible and unique sound. If Fleetwood Mac and The Black Keys had a baby, that is Neon Pony! Following Neon Pony is the extremely talented Pablo Paddy who has played some great shows over the years at the Linsmore! Pablo Paddy is an Eclectic Indie artist from St Catherines and now in Toronto!
Headlining the show is one of our favourite original bands in the country who has headlined a number of great shows over the years at the Linsmore Tavern! Toronto band The Spare Parts are an Indie-Americana band with a Southern inspired Rock n’ Roll flavour. Their debut single Morning Light is a guitar driven bluesy banger of a tune, while their second single Life Moves Fast is a catchy, feel good Country / Rockabilly song. On their debut album Infatuation (June 4th) The Spare Parts show an aptitude for blurring the lines of genre, creating not just a collection of songs; but an album in the truest sense of the word. There is a refreshing earnestness to Toronto born lead singer Phillip Vonesh’s vocals and lyricism that harkens back to the 70’s; think Warren Zevon and Levon Helm. Lead guitarist Bill Dyan was born near Milan, Italy and is affectionately known as The Italian Stallion. He plays with a signature tone and a classic feel. His guitar cascades throughout the album, from blaring solos to catchy licks. Bassist Gavin Quinn (The Tower Of Power) was also born in Toronto, and is the band’s steady hand. While the vocal melodies and electric guitar vie for your attention, Quinn’s smooth and steady bass tones give roots to the melodies and grounds them for the tapping of your toes.