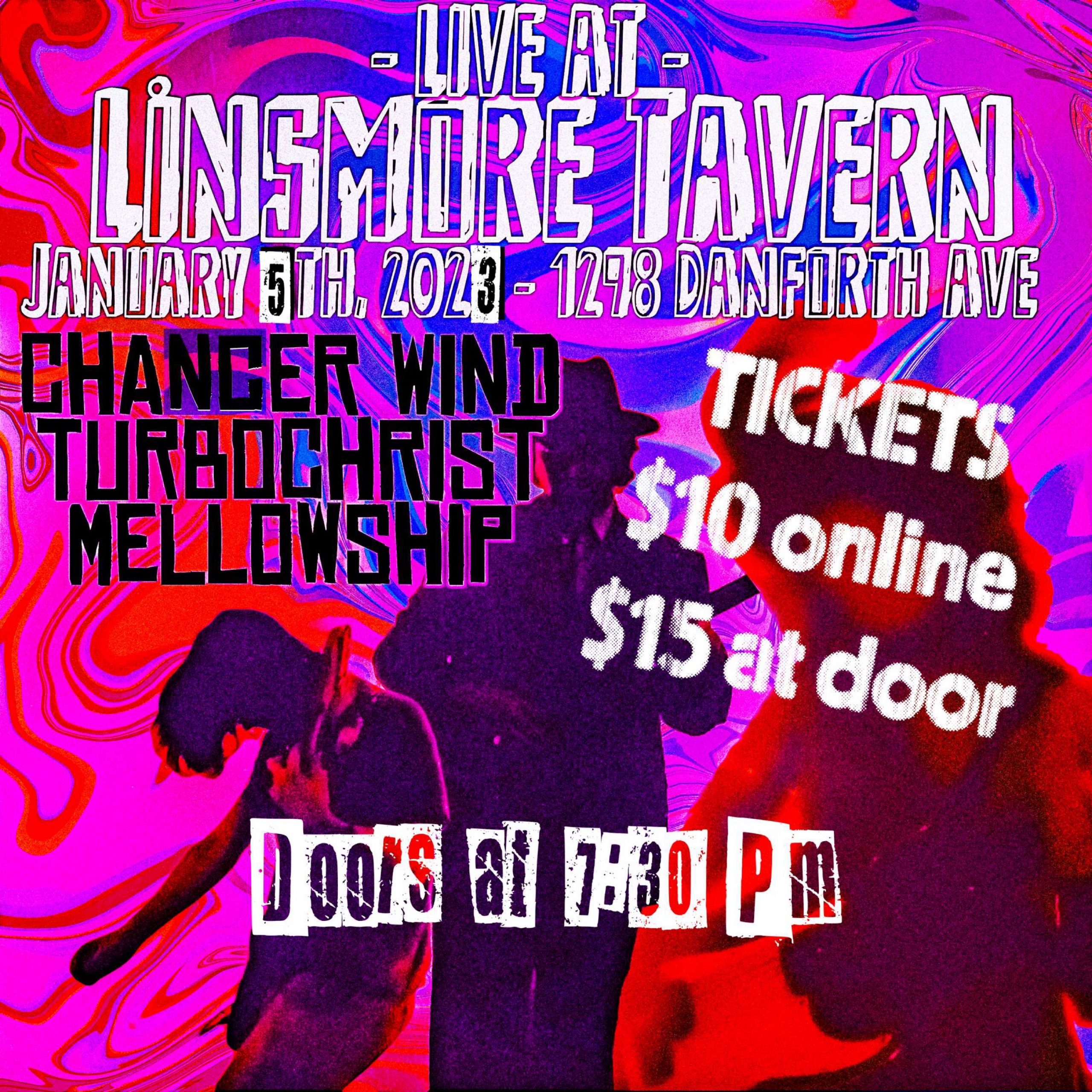 Thursday January 5th, we are kicking of 2023 with 3 of the GTA’s most promising, emerging original bands! All 3 of these band will be playing the Linsmore Tavern’s (1298 Danforth Ave) stage for the very first time, Mellowship, TurboChrist, and Chancer Wind! Music fans, come check out these 3 incredible Indie acts! The show starts at 7:30pm, tickets are $10 in advance, $15 at the door. You can buy your tickets online here: BUY TICKETS!!

Mellowship:
Mellowship is an alternative rock trio bringing influences ranging from the Beatles to the Red Hot Chili Peppers to Hendrix to Nirvana and more. They focus on free live expression, songwriting and strong rhythmic drive. Their sound can be characterized by wiry melodies over jangly guitar, melodic basslines and powerful drums. They will be performing acoustically and will bring a different energy to this gig, which will include some electronic programming for drums but will still be authentic with themselves and the material.

TurboChrist:
Turbochrist is a Toronto-based artist who has been releasing music since he was 15, with his first real EP, idontknow!!!. His most recent album, Rice Lake was released in May of 2022, with 12 songs and a 38-minute run time. He&#39;s currently in the early stages of work on his next album, a self-titled LP. His recording style is rough around the edges, with sounds of moving behind the mic and electrical buzz to fill out an already abrasive sound, balancing soft acoustics with harsh distortion to soundtrack confessional and honest lyrics about the grief that comes with growing up.

Chancer Wind:
Chancer Wind is a local Toronto band. Their name is inspired by a motif in Persian literature in which a cool wind blows life back into existence after a warm wind takes life away. They started playing a year ago and soon put together some shows connecting with other local artists. Their music takes inspiration from various genres but mainly stays in the indie and alt-rock zone. They perform a mix of covers and original songs that they brainstorm and create collectively. Their members consist of Jack on drums, Jenna on bass,  Drew on lead guitar, Sam on rhythm guitar, and Zoe on vocals, occasionally even bringing up surprise guests from their audience. They are planning to record soon and are excited to see what
comes next.