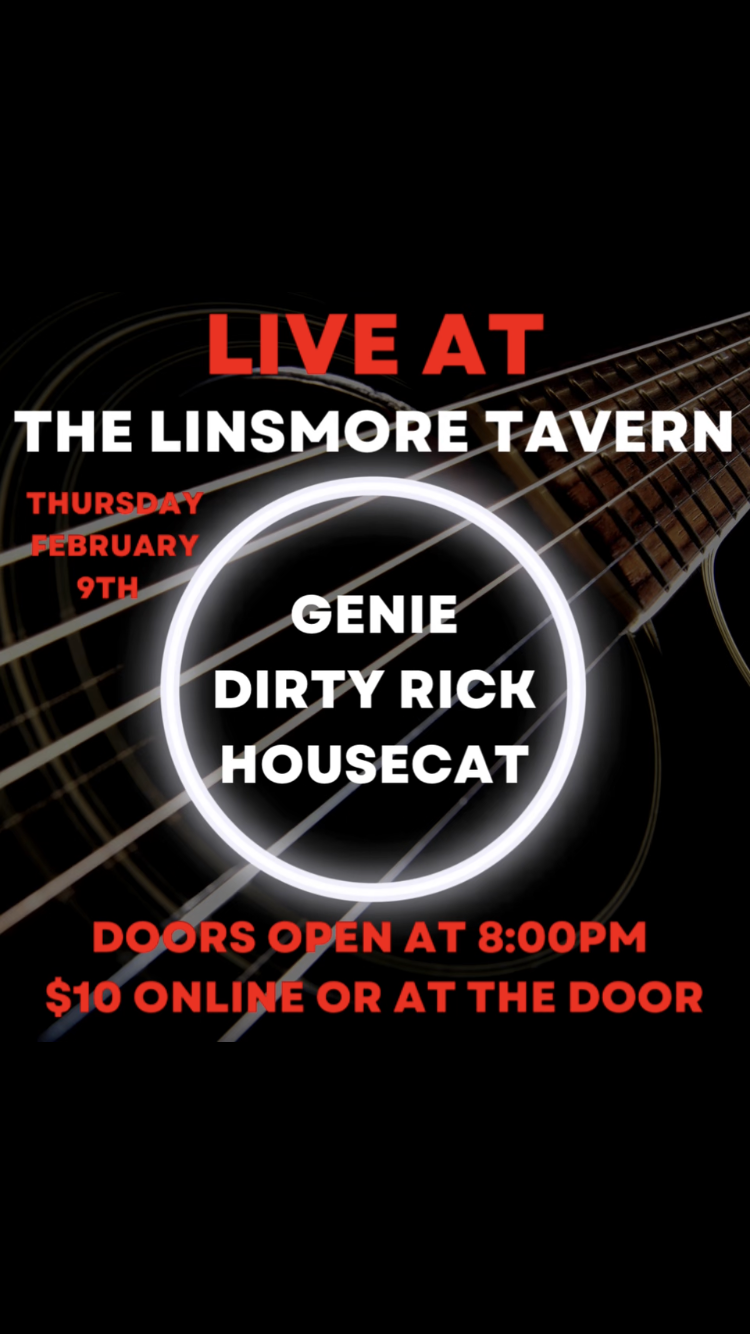 hursday February 9th, the Linsmore Tavern (1298 Danforth Ave) is really excited to bring in 3 of our country’s brightest, emerging Indie Bands! This is going to be a great night of music that Toronto music fans need to check out! Headlining the night is 4 piece Indie Rock Band from Toronto, Genie featuring frontman/guitarist, brother Christian Biagini and his sister on drums Samantha Biagini! Also appearing is a 4 piece rock ‘n’ roll band heading up the QEW from Hamilton, Dirty Rick! Indie-pop trio from Waterloo, Housecat will be rounding out this electric night of original music! The show starts at 7:30pm, advance tickets are $10 and can be purchased online here: BUY TICKETS!

Housecat is an indie-pop trio based out of Waterloo. Formed in the summer of 2022, the band just released their debut single on Halloween. Critics are calling it the best song of all time, since ever before- ever. Their music can be described as catchy, devastatingly sad, and a little bit morbid. #meow

Dirty Rick – DIRTY RICK is a four-piece rock ’n’ roll machine from Hamilton, Ontario dedicated to putting on the wildest, sweatiest, dirtiest rock shows in the country. Their unique combination of fat basslines, banging drum beats, and crushing guitar riffs combine blues, hard rock, and garage elements into a finished product that music industry elites have described as “pretty cool” and containing “a lot of good stuff in there”. If you’re lucky enough to stumble into one of their concerts, quarterbacked by their ultra high-energy frontman David Koffman, you’ll be left staggering out afterwards with your dancing feet sore and your face thoroughly melted. Check out their latest single “Doomsday”, their smash-hit “Oh No (Yeah)”, or fan-favourite “Toxic Love” wherever you get your music.

Genie – 4 Piece indie rock band from Toronto, Ontario. The band features frontman and guitarist Christian Biagini and drummer Samantha Biagini. The brother sister duo has been playing together their whole lives and it’s clear based on their chemistry once they hit the stage. Their goal on the stage is to make the audience dance. Catchy tunes with infectious melodies highlight the show, Samantha smashes the drums, while Christian keeps the crowd engaged the whole time. Mark Zarich and Philip Zigomanis hold everything down while the other two go off and have all the fun. Their debut single “Baby Blue” set to release in February of 2023.