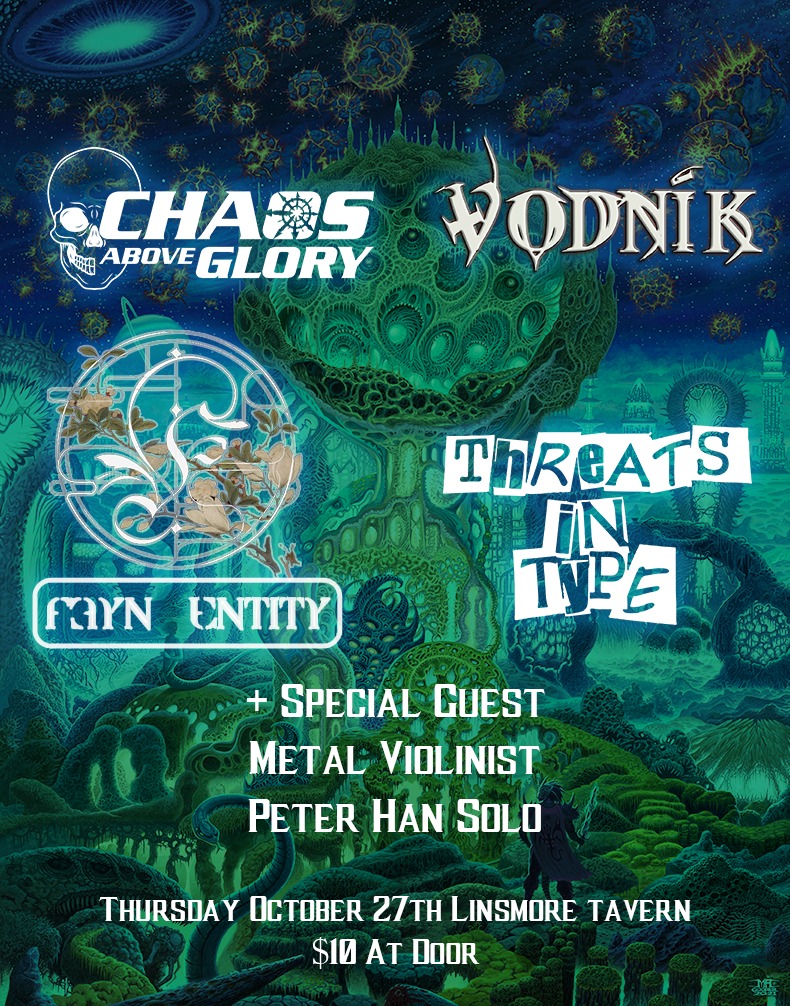 Thursday October 27th is for all of you Hard Rock and Heavy Metal fans, as we are welcoming 4 incredible Ontario based Original Metal bands for the very first time! Kicking off the evening is Chaos Above Glory, followed by Vodnik, Feyn Entity, closing the evening is Threats in Type and special guest, Metal Violinst Hans Peter Solo ! The show starts at 8pm, there will be a $10 Cover charge at the door! Metal fans, don’t miss it!

The group’s music has strong ties with some of the best heavy rock out there, but there is also a more dynamic feel to it, giving the music a more spontaneous and approachable vibe overall. The band’s sound is all about atmospheric melodies and heavy riffs, going for a punchy, monolithic sound. Their music is a blend of various influences, channeling the energy of heavy rock with a unique twist.

Vodník: Vodník is a solo project by Czechocanadian Jeremy Jackson Wells. Driven by his passion for music, Jeremy has been writing songs and sharing them with the world since 2009. His music is mostly based on European folklore, giving it a dark, mysterious, and powerful energy. Packed with modern and progressive metal elements, Vodník’s music would be a powerful addition to any headbanger’s collection.

Feyn Entity: Founded in Toronto by KL, Feyn Entity is a modern metalcore band with djent influence. Being the only heavy band featuring full Asian members, we are trying to bring an eastern asia style shot into the contemporary heavy scene here in North America. After almost 3 years, it’s exciting to be back on stage with a new line-up and new songs to share with all of you lovely music lovers.