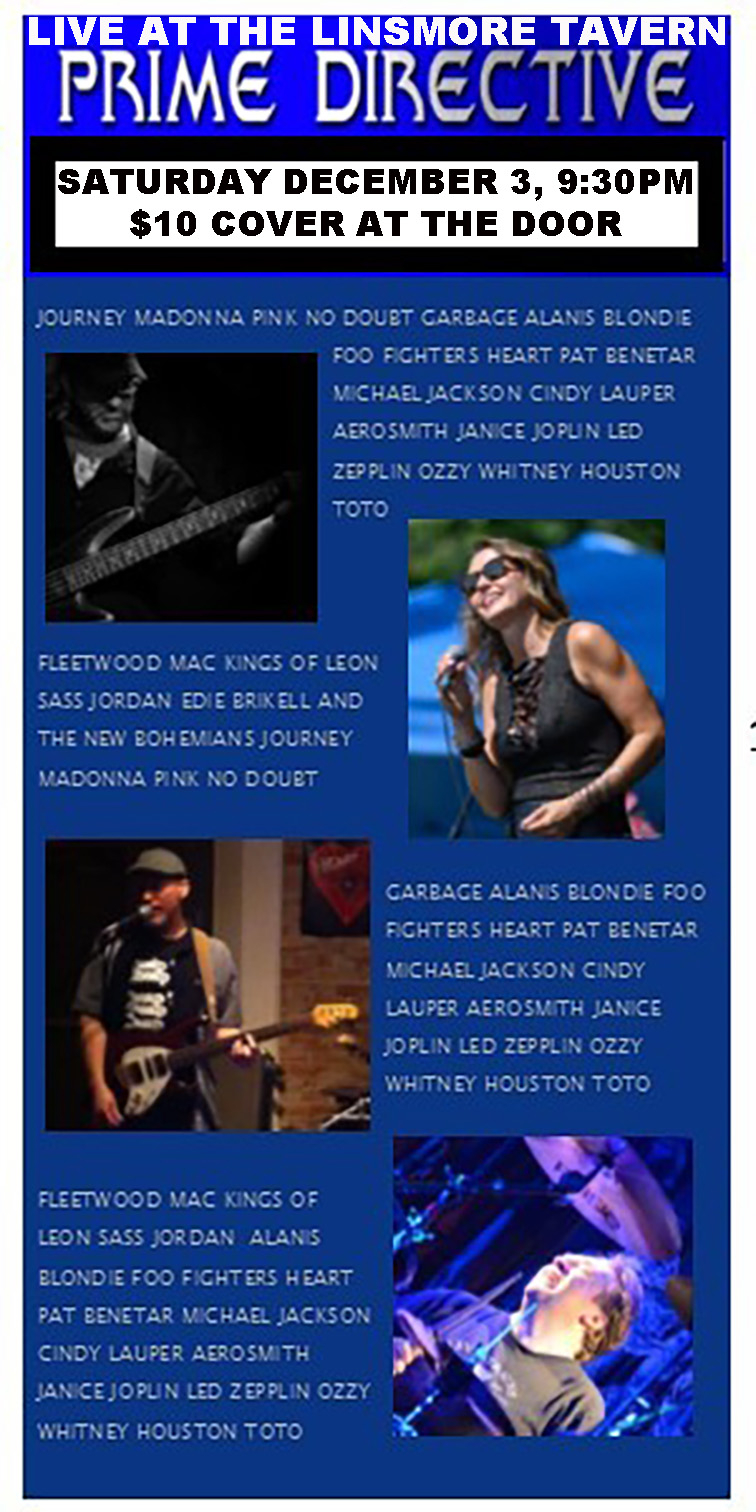 Saturday December 3rd the Linsmore Tavern (1298 Danforth Ave) will welcome back the first band we called upon when the Linsmore returned from almost a 2 year hiatus because of the Covid 19 lockdowns! Prime Directive will make their glorious return and we are so happy to bring this top-notch party band back to our stage! This band will bring the party with a fun, upbeat, danceable set-list that you will want to hear! The show starts at 9:30pm, there will be a $10 cover at the door!
You will hear songs from Queen, Journey, Rush, Pink, No Doubt, Alanis Morissette, Blondie, Foo Fighters, Heart, Pat Benatar, Sheryl Crow, Cindi Lauper, Aerosmith, Janice Joplin, Led Zeppelin, Fleetwood MC, Alannah Myles, Madonna, Michael Jackson, Garbage, Sass Jordan, Kings of Leon and so much more!
Prime Directive brings the best party rock to your event!
Four individuals, whose collective experience includes:
Shantelle, vocals: Born into a military family, Shantelle began singing at small events on-base all around the world until her calling pulled her into a small casino in Abu Dhabi, singing for 6 shows a week over 12 years. We’re lucky she came to Canada!
John, bass and vocals: John lives in Burlington now, but for nearly 20 years he toured in various bands across North America. Always on the cusp of breaking into the ‘big time’, he has shared stages and opened for world-class talent, such as The Stones, Arcade Fire, Tom Jones, Oscar Peterson and Paul Williams.
Serge, drums, vocals and ephemera: Serge is a force to be reckoned with behind the kit! Equal parts Bonham and Peart, Starting in his dad’s big band at 10, he’s studied various styles through the years. He has played every venue in the GTA (and many you may never have heard of) at least once, and toured trough Canada and the northern states with Gunz N FN Rosez. Laying it down for the band, he provides a foundation that will rock your world!
Paul, guitar and vocals: Paul doesn’t say much about himself, but we know he slugged it out all across Asia for over 20 years, gigging in every American and Canadian expat dive and festival that you can name. He has forgotten more classic rock songs than he knows. We think his favourite colour is orange, but it could be blue.
Together, Prime Directive is ready for anything! Playing to the crowd, this well-rehearsed outfit is way better than a bubble machine for your party, and will keep the dance floor packed and the refreshments flowing.
For more info, check out PrimeDirective.ca
Rock is the Prime Directive!