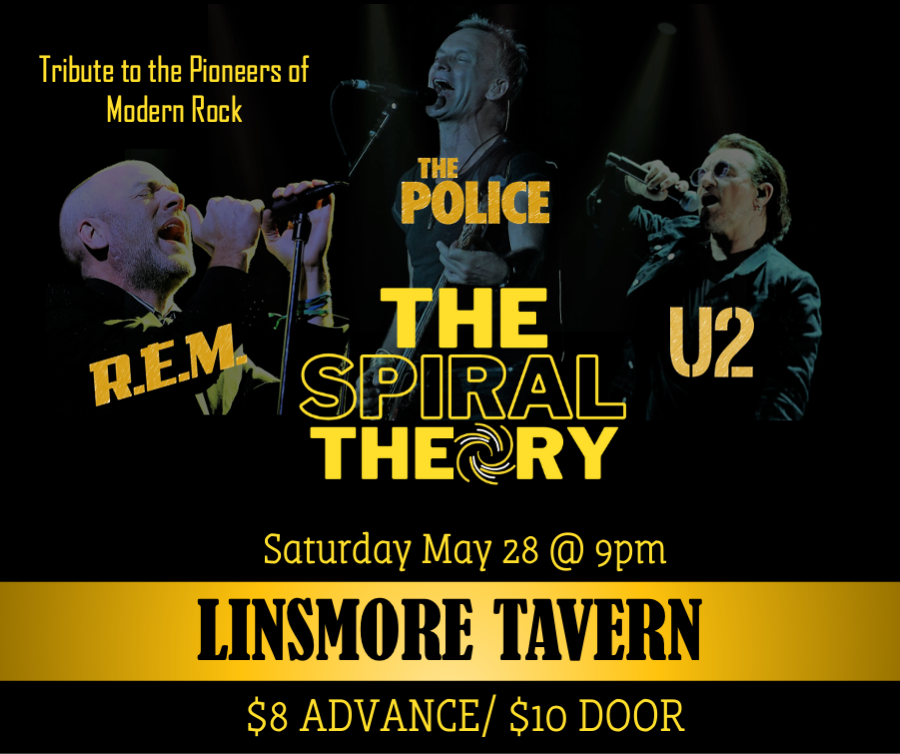 May 28, 2022 9:30 pm - 11:59 pm
This is going to be an excellent night of music and a really fun night! The Linsmore Tavern is extremely excited to welcome back for the first time since 2019, The Spiral Theory: Tribute to The Police, U2, and REM – Pioneers of Modern Rock! The Spiral Theory will be performing a two set tribute to these icons who were on top of the world during the 80’s, ushering in a new era of guitar-oriented rock with a conscience. The third set for the evening will be covers that are equally energetic and crowd-pleasing from other influential rockers who followed (Foo Fighters, Black Keys, The Strokes. etc.) This fantastic band tore the roof in their previous shows at the Linsmore to capacity crowd,s so we are thrilled to bring them back again in 2022! The show starts at 9:30pm, so don’t miss it!
THE PIONEERS OF MODERN ROCK!
In 1983, The Police is selling out stadiums across North America as the world’s most popular rock band. Their opening act, on their first national tour, is barely known R.E.M.. In 1985, U2 plays the Longest Day festival in Milton Keynes, England with R.E.M. on the same bill. Bono later stated meeting Michael Stipe on that day, and their ensuing friendship, was “one of the most important moments of my life.“ On the final show of the 1986 Amnesty National Tour at Giants Stadium in New York, The Police symbolically take their instruments off during “Invisible Sun” and pass them over to U2, who then finish the song before starting their own set. The torch is officially passed. By 1991, with the releases of “Achtung Baby” and “Out of Time”, U2 and R.E.M. have become “the most important rock bands of a generation, setting a new standard for how arena rock
concerts could feel and how they could communicate” – The Chicago
Tribune.
Tickets are $8 in advance, $10 at the door! You can buy tickets online at www.linsmoretavern.com
<!--