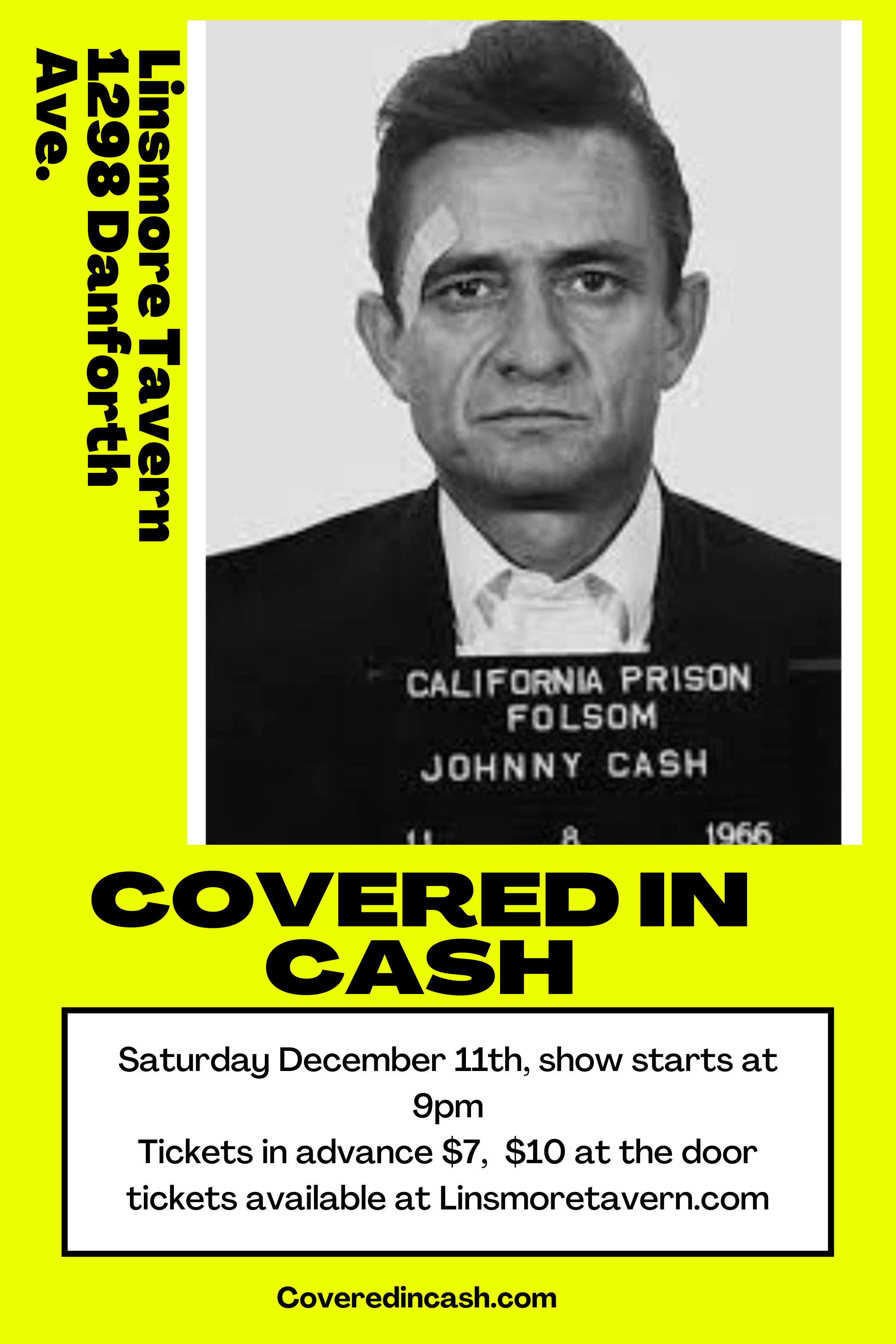 Saturday December 11th, the Linsmore Tavern is full of anticipation to welcome back Covered in Cash: Johnny Cash Tribute who also happen to be the Premier Johnny Cash Tribute Bands in all of Canada! This will be Covered in Cash’s first show in nearly two years, due to the pandemic, so they will definitely bring THE RING OF FIRE! We had heard so many amazing things about this band and all or their legendary shows at the An Sibin, and man have they delivered with a number of SOLD-OUT shows over the years at the Linsmore! After seeing them perform at the Linsmore consistently over the last few years, we can confidently say that they are not just any Johnny Cash Tribute Band, they are the Best Johnny Cash Cover Band in Canada!

Featuring Rick Aulier as Johnny Cash who happened to own the very popular Irish Bar on Queen Street – An Sibin, where Covered in Cash played many capacity filled and memorable shows over the years at this popular bar! Rick Aulier doesn’t try to be an impersonator of Johnny Cash, but if you closed your eyes and started the set by saying, “Hello I’m Johnny Cash”, for one fitting moment you would fee you just heard the voice of the man in black. His contagious banter on stage draws you in and every now and then, when it gets more rockabily than country, Rick Aulier tones it down with heartfelt ballads like the swan song of Cash, “Hurt”.

Covered in Cash has a great line-up of musicians, on lead guitar sending out Allman-esque solos is James Quinn. On bass guitar seasoned, Richard Bunnyboils holds the fort with a solid beat and great background oohs and ahhs. On acoustic guitar is Tom Price, almost looking too young to know the tunes, but obviously embraces them with great gusto and has a magnetic stage presence partnered with solid rhythms. Price also has background vocals that blend well with Aulier. On drums, the only Irish part of the band is Conor Garrity, who keeps a solid hold on the backbeat of the show. We are definitely going miss not having one of our favourite guys, Herve Bassett who was the keyboardist for Covered In Cash who recently passed away (RIP). But we definitely want to pay respect to the man who brought Covered in Cash to the Linsmore, as these shows would have never happened without the talented Herve Bassett!

Covered in Cash is a great tribute to a great artist! This show is definitely going to be a SELL-OUT, so get your tickets now! Tickets are only $7 in advance, $10 at the door! You can buy tickets at the bar or at www.linsmoretavern.com