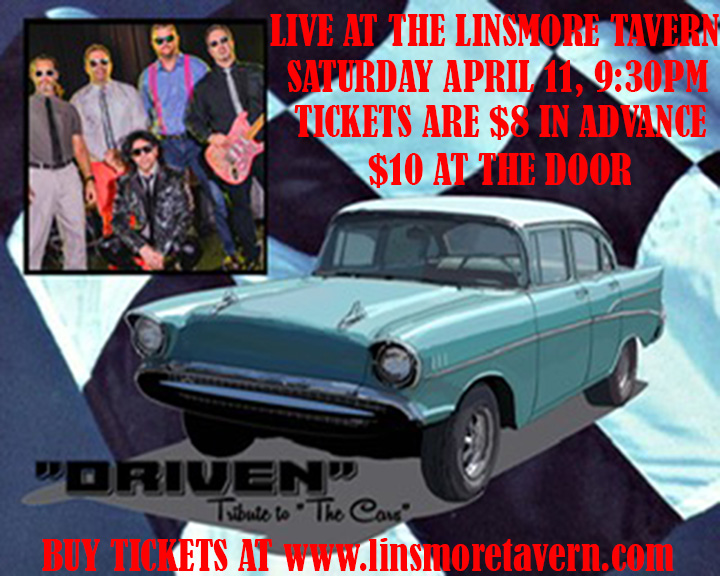 September 15, 2019, one of the great American musician’s and songwriter’s Ric Ocasek, founding member of The Cars passed away. For many years, the Linsmore Tavern has been looking all over the country for a tribute to this amazing New Wave pioneers and until now we have not been able to find one! Finally, the search is over and we are so excited to welcome on Saturday April 11, Driven: The Ultimate Tribute to the music of The Cars! This is going to be one of the most fun nights of the year and definitely a Tribute show that you will want to check out!

Emerging from the new wave scene in the late 1970s, The Cars received massive critical and commercial success with a string of hit songs beginning with “My Best Friend’s Girl”, “Just What I Needed”, “Let’s Go”, to the 80s radio staple, “Drive”. Rolling Stonenamed The Cars the“Best New Artist” in 1978. Their hit song, “You Might Think”, was awarded “Video Of The Year” at the first MTV Video Music Awards in 1984. Inevitably, on April 15th, 2018, The Cars were inducted into the Rock and Roll Hall of Fame.

The Cars induction sparked a renewed interest in the band’s music. As a result, almost exactly two years to the date of their induction ceremony, on Saturday, April 11th, 2020 the Linsmore Tavern hosts Driven: The Ultimate Tribute to the music of The Cars! Featuring five professional musicians from the Toronto area, Driven takes to the stage and painstakingly recreates the labyrinthine synthesizer and guitar textures that made The Cars songs famous. Not content to just sound like The Cars, Driven also features vocalist, Barry Davis, who not only sounds like Ric Ocasek but looks like him, as well! This is a rare opportunity to catch Driven in an intimate venue like the Linsmore! Don’t miss it!

Tickets for this show are $8 in advance, $10 at the door. You can buy tickets at the bar or online at www.linsmoretavern.com

We use cookies to ensure that we give you the best experience on our website. If you continue to use this site we will assume that you are happy with it.OkPrivacy policy