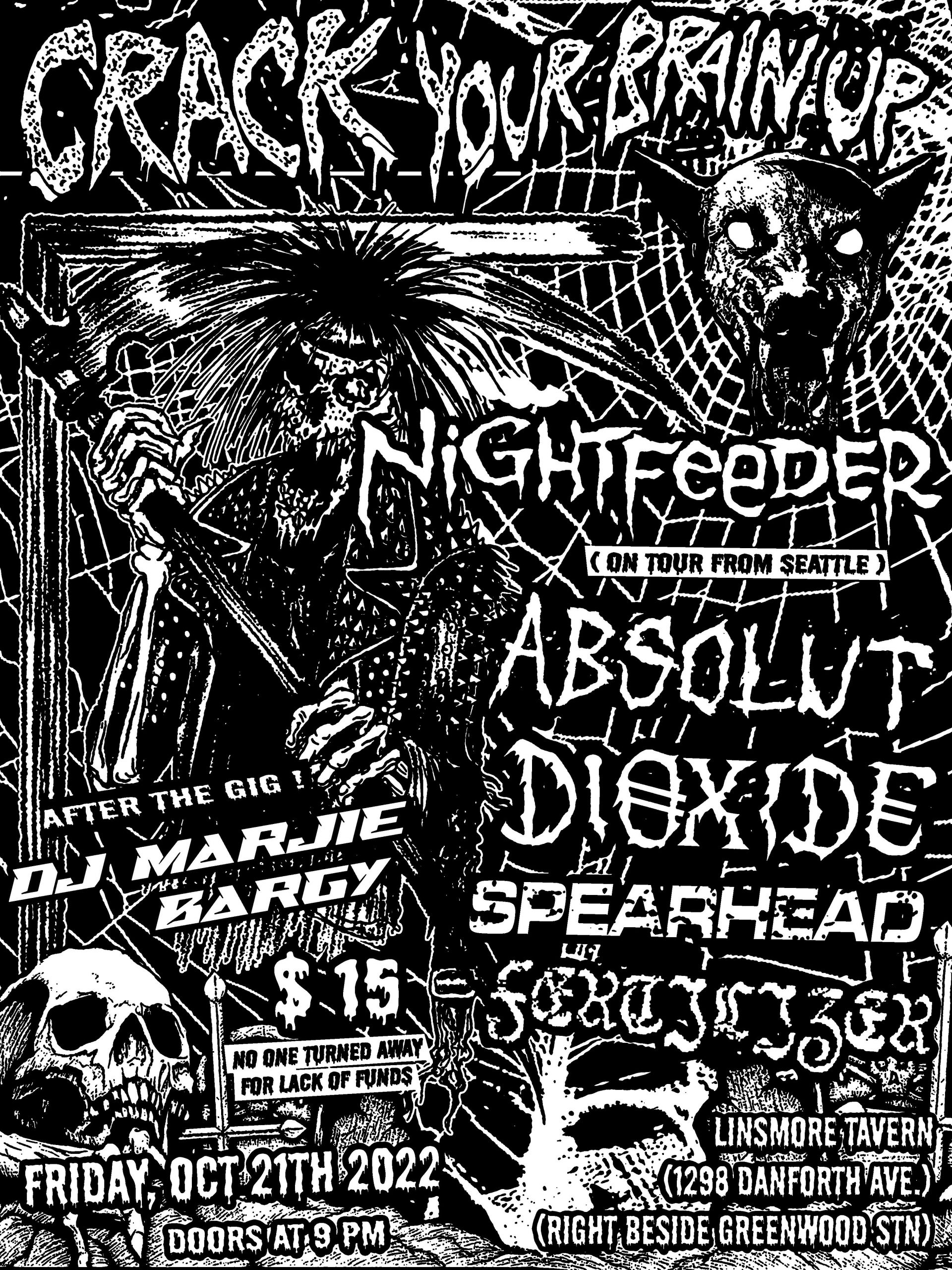 This is really cool! The Linsmore Tavern (1298 Danforth Ave) is hosting a night of Hardcore music with 5 different Hardcore Bands and 1 DJ! On Friday October 21st, Hardcore music fans the Linsmore is the place to be at, as this evening is dedicated to the Toronto Hardcore Music Scene! Featuring all the way from Seattle, Nightfeeder! Also on the bill are Toronto based Hardcore bands, Absolut, Dioxide, Fertilizer, Spearhead and DJ Marjie Bargy! The show starts at 9pm, there will be a $15 cover charge at the door!

Nightfeeder:
Nightfeeder on tour from Seattle are
Punishing, bitter, dingy punk with timeless catchy riffs played brutal and fast, with filthy breakdowns. Spiteful lyrics about the government not giving a fuck about you, colonialism and just having a hard time. Fans of State of Fear, Consume and Deathraid, rejoice. This band features 4 out of 5 members of the previously mentioned groups. No surprises of what to expect.
Absolut:
Absolut is a Toronto, Canada based hardcore punk band with an impressive discography , considering their formation back in 2010. The band plays something between Swedish, Japanese, British and American school of hardcore punk and kinda reminds me of the music played by the legendary bands such as Anti-Cimex, Broken Bones, English Dogs, Heresy, Discharge, Poison Idea, Battalion Of Saints, Crucifix…just to name a few. Reminiscing the 80’s a golden era for such a genre, but still not copying the bands I’ve already have mentioned above
Dioxide:
Dioxide are a newer band from Toronto. Who have made themselves known and quickly.
They play raw punk influenced by Discharge, early Finnish hardcore and dark UK82. Consistent dbeat remind you of early Discharge. Not to be missed.
Fertilizer:
Blown out, stomping fury. Fertilizer delivers mid-paced, old school Black Punk madness, spreading chaos and destruction via bass-heavy jangly grooves and total vocal evisceration.
Something to definitely please fans of Bone Awl, Raspberry Bulbs, Furdidurke or Dolmen Shrine.
Spearhead:
After an extended break Spearhead are back to bring you that blown sharp shock of noisy 80’s American style hardcore not unlike Negative Approach, or Koro. Expect nothing more than total breakneck speed. Stoked they reformed and you should be to.
DJ Marjie Bargy
But After the gig
Stick around and grab some drinks or just dance your face off…
You know her, you love her,
It ain’t a party without Marjie Bargy and she’ll be there playing your favourite punk , rnr , dance, goth and new wave hits and unearthing your new favourite tunes. Let’s dance baby!
The Shop
View CALENDAR
BUY TICKETS
Our Blog
This is the place to come see
a big name in a small venue