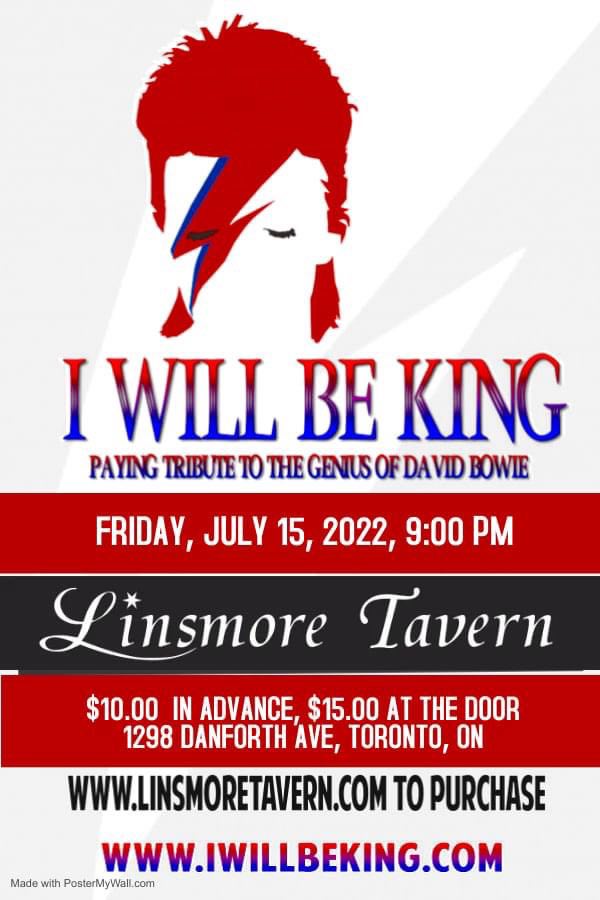 July 15, 2022 9:00 pm - 11:59 pm
The Linsmore Tavern is excited to bring back one of the most popular bands to play the Linsmore Tavern, I Will Be King: Paying Tribute To The Genius of David Bowie on Friday July 15th for the first time since 2019! I Will Be King have played ten outstanding SOLD-OUT shows at the Linsmore Tavern over the last few years and we are thrilled to have them come back! There are a few Bowie Tributes out there, but none of them stand up to I Will Be King! Let’s face the facts, David Bowie is one of the most influential artist’s who has ever lived and he is a musical genius! This 6 piece band will definitely deliver the goods of the music of David Bowie and if you are a fan of Bowie, do not miss this show! There really is no David Bowie Tribute out there, like them!
There are few Artists that have influenced so many aspects of pop culture than David Bowie, in style, fashion, musicality, performance and both genre and gender bending.
STILETTO FLATS began planning a very special tribute to David Bowie at the beginning of 2015. They had no idea that he would pass in 2016 (indeed, Bowie seemed to have an ethereal personality that would keep him with us for years to come).
With his death, the Flats have taken very special measures to present the best Bowie tribute possible, recognizing that there are few or no female-centric bands that would dare to undertake this. They present you, I Will Be King: Paying Tribute To The Genius of David Bowie!
The Band Features:
Elana Harte, vocals, guitar
Lucio Agostini, backs, guitar
Janet Whiteway, backs, keyboards
Jen Benton, bass
Robyn McDonald, drums
Suze Burmester, percs, backs
Tickets for this amazing show are now on sale and are only $10 in advance, $15 at the door! You can purchase your tickets at the Linsmore Tavern or at www.linsmoretavern.com
<!--