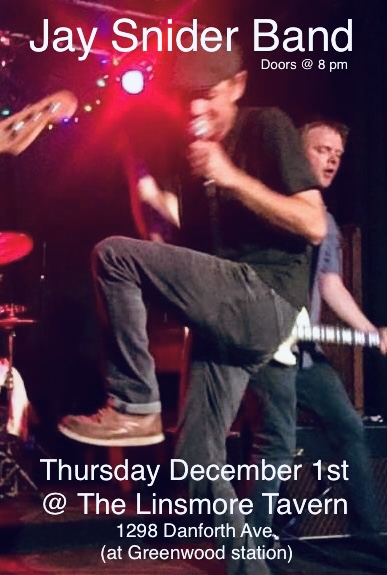 December 1st, is going to be a really fun night that combines some original music with a set of Tragically Hip covers! Jay Snider Band will be in the house and he’s excited to deliver a fun evening of original music with some Tragically Hip! Known for his work with The Eines, Jay and his band will be rocking out to The Hip for a set, so Hip fans come on out! The show starts at 8pm, there will be a $10 cover at the door!

JAY SNIDER: After nearly a decade spent living in Los Angeles, Jay Snider finally returned home to Toronto. A lifetime in indie music with The Eines and as a solo artist, has left Jay with an impressive catalogue of songs to choose from. In 2010 Snider released his critically acclaimed album Sunset Transmission recorded in Los Angeles with renowned Producer and Mastering Engineer João Carvalho (The Tragically Hip, Smashing Pumpkins, Death From Above) and enjoyed a healthy amount of radio play and film/tv licensing across North America. Over the years Jay has shared the stage with the likes of Dallas Green, The Kings, I Mother Earth and countless others. His experiences have left him with a wealth of stories and a knack for telling them—Jay Snider is a must-see for any fan of infectious rock music from an engaging storyteller.