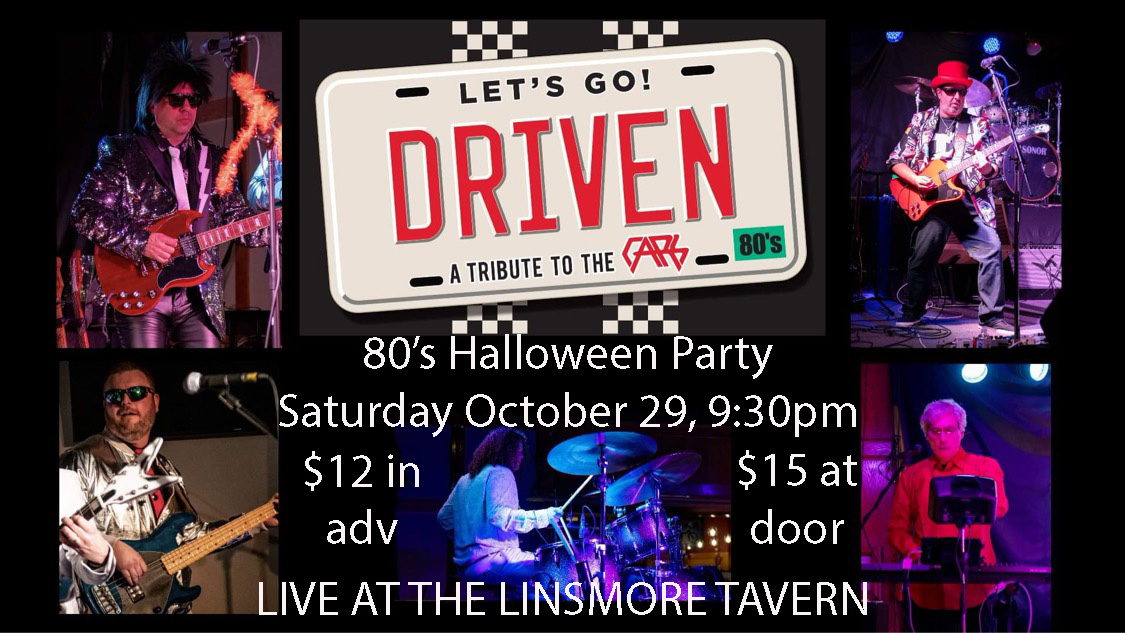 There have been some amazing parties over the years at the Linsmore Tavern (1298 Danforth Ave), but nothing is going to compare to this one! Saturday October 29th, we are hosting an 80’s Halloween Party and we couldn’t think of a better band to host this night! Driven. A tribute to The Cars will kick off the night with a 90 minute set of 80’s icons The Cars! Following this set will be a 90 minute set from The 80-its that will take us deep into the night with danceable, fun songs from the 80’s!

Featuring Sports personality Barry Davis, Driven. A Tribute to The Cars and The 80-its played earlier this year at the Linsmore to a capacity crowd and it was such a fun night, that had everyone up and dancing all night! We have had a ton of requests to bring this band back and we couldn’t think of a band better suited to put on an 80’s Halloween Dance Party than these two bands!

Driven. A Tribute to The Cars brings to life the look and sound of the legendary Rock And Roll Hall Of Fame band through their monster hits such as, “Just What I Needed”, “Drive”, “Magic”, Shake It Up”, “My Best Friend’s Girl”, “Good Times Roll” and more!

The 80-its bring the very best of 80s rock and new wave to every show. Rocking out the music of such greats as Duran Duran, ELO, Soft Cell, Dire Straits and so much more! The 80-its bring you back to a different time: A time of big hair, loud clothes, with a high energy show that brings to life the very best mixed taps of the wonderful decade that was the 80s!

Get your tickets now in advance, because it should SELL-OUT! Tickets are $12 in advance, $15 at the door! The show will start at 9:30pm and will go late into the AM with over 3 hours of live music! You can buy tickets at www.linsmoretavern.com