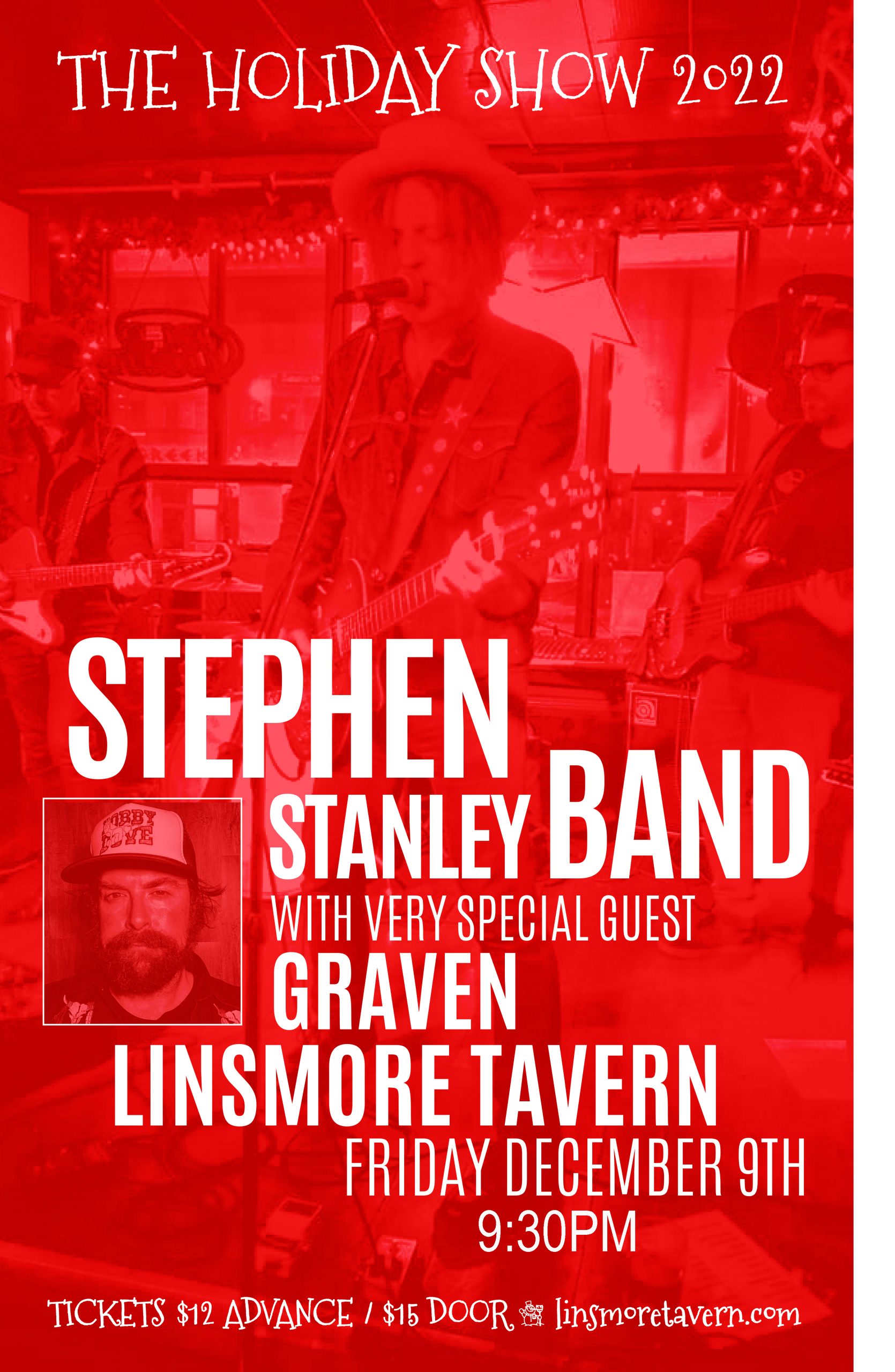 December 9, 2022 9:30 pm
Friday December 9th, the Linsmore Tavern (1298 Danforth Ave), is extremely excited to welcome back one of the best musicians in Canada, Stephen Stanley and his band! For those who don’t know, Stephen Stanley is founding member, lead guitarist and vocalist from Legendary Canadian Rock band The Lowest of The Low! We were fortunate to his his band play in 2019 and he tore the house down to a SOLD-OUT Crowd! Opening the evening will be emerging Ottawa original band, Graven! Stephen Stanley Band is definitely going to be a hot seller and it’s a real honour to have a legendary Canadian musician perform at the Linsmore! If you are a music fan, this is a MUST-SEE show! Tickets are $12 in advance, $15 at the door! You can buy tickets online at www.linsmoretavern.com
Canadian singer-songwriter and guitarist Stephen Stanley is best known from his years as a founding member, lead guitarist and vocalist with alternative rock band The Lowest of the Low. After many hits, years of touring and sharing the stage with the likes of Billy Bragg, Bob Mould, The Violent Femmes, The Jayhawks and Lloyd Cole, and a gold record for their album Shakespeare My Butt, Stanley is back on the music scene with his own group, The Stephen Stanley Band, and an internationally acclaimed record Jimmy & The Moon. Jimmy & The Moon received considerable radio airplay, raves and features in Canada (Now Toronto, Exclaim!, Spill Magazine, Fervor Coulee, FYI Music News, etc.), the US, Netherlands, Ireland, and the UK. As the press poured in and Stephen and the band played numerous shows across Canada, including Stephen opening for Lee Ann Womack at Toronto’s Horseshoe Tavern, the Stephen Stanley Band accepted an offer to play at the 2018 Static Roots Festival in Germany. They then went on to tour the UK and Ireland. Americana UK described Jimmy & The Moon and Stephens artistry this way: “The songs are big and bold, unafraid, unashamed to flaunt their heritage… Stanley’s voice being not a thing of beauty but a workman’s tool skillfully used to create just the right effect…This is the work of a veteran who still has things to say.” Stephen expressed in an interview with Canadian Beats that he is “a write what you know kind of guy, and this album is no exception. For me, this album is about living in a city that is changing right before our eyes, sometimes for the better often for the worse.” Stanley is currently working on, arranging and pre-producing his band’s next record.
Graven (Matty McKechnie) is a Nepean, Ontario, Canada-born indie folk musician and songwriter who used to make bedroom rapcasettes in his teens under the name “Man Of Steel”. His newest album Simple Complex was mixed by Joel Plaskett and made in Dartmouth, Nova Scotia. With 15 major releases under his belt, Matty (Graven) has a perpetual passion for creating and sharing music. Matty is continually keeping busy throughout the pandemic with uplifting words and songs of support for his dedicated fan-base, which he has dubbed “Graventown” — a highly accepting and inclusive community which has become a safe-haven for anyone and everyone who wants to be their real-self without judgement.
<!--