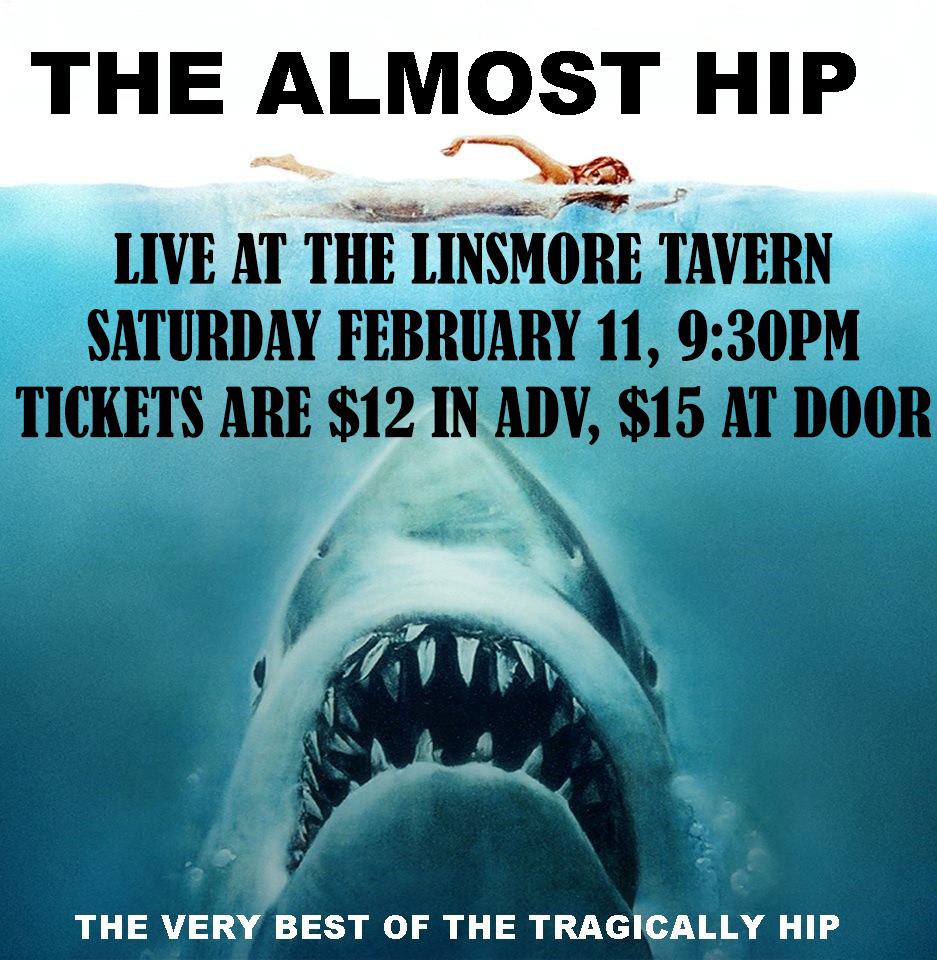 February 11, 2023 9:30 pm
Saturday February 11th is an evening of music for all of the Canadian music fans out there, as the Linsmore Tavern (1298 Danforth Ave) is excited to welcome back, Almost Hip, who will be playing the music of The Tragically Hip & Gord Downie! Almost Hip is definitely going to bring the party and it doesn’t get any more Canadian then an evening of the music of Canadian Icons, The Tragically Hip. The Tragically Hip is ingrained in Canadian culture, that’s why we are looking very forward to this amazing Tribute to Gord Downie and the boys! Almost Hip have played many memorable SOLD-OUT shows at the Linsmore Tavern and we always get so many requests to bring them back, because they are unbelievable!
Formed in Kingston Ontario in 1983, The Tragically Hip has released 12 studio albums, two live albums, 1 EP, and 54 singles. Nine of their albums have reached No. 1 in Canada. They have received numerous Canadian Music awards, including 14 Juno Awards.
ALMOST HIP was born in the fall of 1990 and played it’s 1st Official gig at a bar in Kitchener called ” DUFFERS ” on Oct 6th. The band has not stopped accepting bookings since that day. Dubbed as “ALMOST HIP – The Longest Running TRAGICALLY HIP Tribute on the Planet”. They have enjoyed a tremendous amount of success with their HONEST approach to the music. They have studied and concentrated on reproducing the LIVE HIP sound that has catapulted “The Tragically Hip” into the hearts and minds of ALL CANADIAN music fans. The Tragically Hip” is one of the most respected rock bands in Canada and are often referred to as “Canada’s Band “. ALMOST HIP delivers the songs with such an intensity, style and tightness, you’ll think you’re listening to the The Tragically Hip LIVE. This Kitchener, Ontario band plays and sounds just like the original in a LIVE setting . . .
ALMOST HIP – We will make you look twice !!!
ALMOST HIP – We will make you look twice !!!
Tickets for this show are now on sale and are $12 in advance, $15 at the door!
<!--