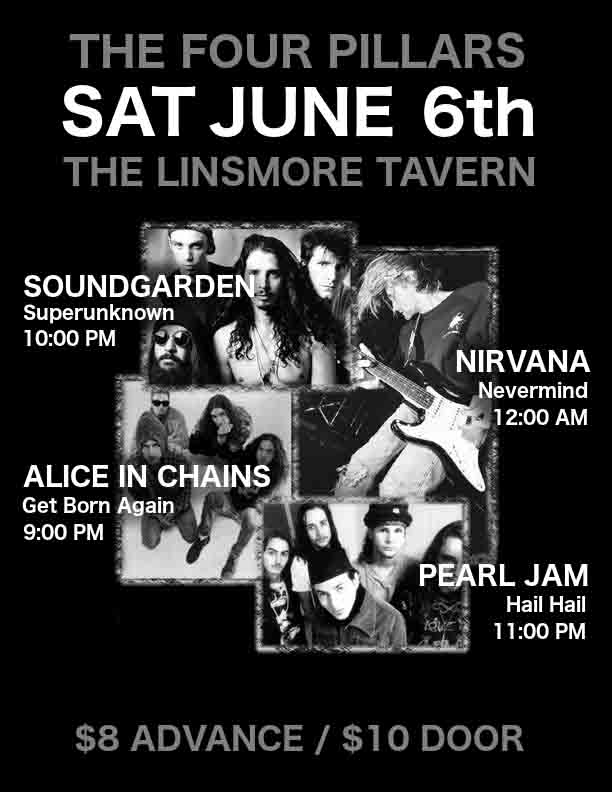 Get ready Seattle 90’s rock fans!! This is going to be a night that you MUST be at, as the Linsmore Tavern is welcoming back one of the most popular shows in the GTA on Saturday June 6th, The Four Pillars of Seattle – With Get Born Again – Alice in Chains Tribute, Superunknown Tribute to Soundgarden, Nevermind Tribute to Nirvana, Hail Hail A Pearl Jam Tribute. The four biggest Grunge bands who all happen to come out of Seattle, all being performed live in one night! There will be one set performed by each Tribute for this night, so you will get to hear the music of all 4 of these legendary 90’s rock bands that put Seattle music on the map! This is one of the very best shows out there and we get constant requests to bring back these 4 incredible Tributes who have blew the roof off of the Linsmore to multiple SOLD-OUT shows! This show sells out real quick so get your tickets in advance!

GET BORN AGAIN are a tribute to the sinister side of Seattle: ALICE IN CHAINS. Based in Toronto, Canada. GET BORN AGAIN are 4 professional musicians recreating the music of what is arguably the greatest band of the Seattle grunge scene in the 1990s. The band performs songs from ALICE In CHAINS’ 3 full-length albums: ‘FACELIFT’, ‘DIRT’, ‘SELF-TITLED/3-Legged Dog’, two Eps: ‘SAP’ & ‘JAR OF FLIES’, as well as songs that were released as part of Compilations and Movie Soundtracks… They may even throw in the occasional track off post-Layne Stayley/William Duvall era albums: ‘BLACK GIVES WAY TO BLUE’ & ‘THE DEVIL PUT DINASAURS HERE’. GET BORN AGAIN’s shows bang-out a fiery electric set that’s spliced with some haunting acoustic renditions in the style of the famous Alice In Chains MTV Unplugged performance. Come to one show and they guarantee you’ll want to come back “again…and again…and again….”

We LOVE Nirvana! What’s not to love!? We have them to thank for breaking the door wide open for the Seattle scene to make its way through. The Godfathers of Grunge. The band ‘Nevermind’ is a tribute to them and their awesome music. They love the singles, b-sides, and deep-cuts and will play ‘em all! They are 4 professional musicians who want to do them justice and give people a chance to hear their music live and roaring through the amps, drums and P.A. the way it was meant to be experienced. Or whatever….Nevermind….

Hail Hail (Pearl Jam Tribute) are based in Toronto. https://www.reverbnation.com/hailhailpearljamtribute

This is going to be a hot seller, as their last 3 shows SOLD-OUT well in advance! You get to see 4 separate Tribute Bands, each playing a set of the music of the 4 pillars of the Seattle Rock Scene of the 1990’s! Tickets for these 4 separate Tribute bands are ONLY $8 in advance, $10 at the door! You can buy tickets at the bar or online at www.linsmoretavern.com