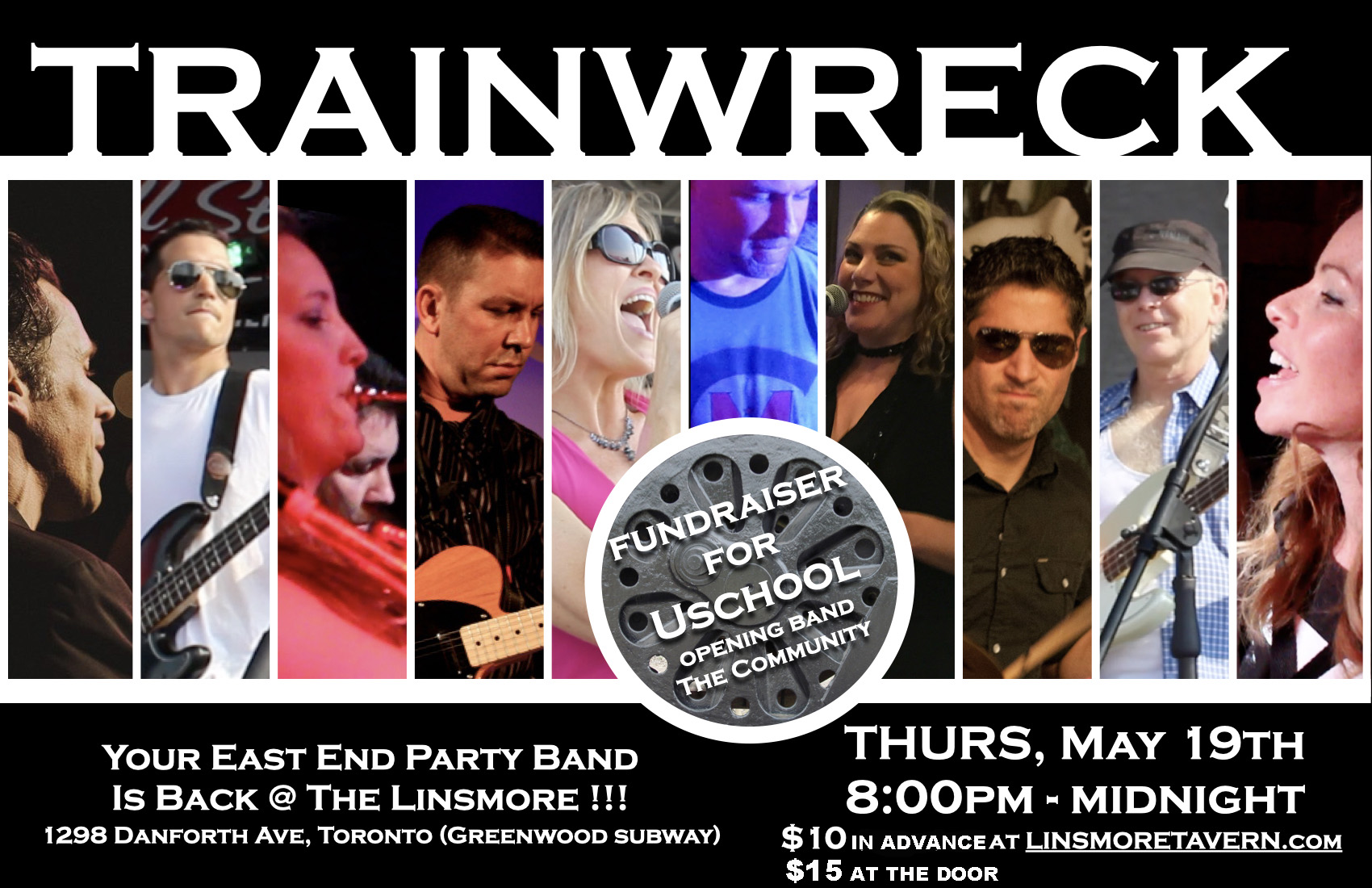 May 19, 2022 8:00 pm - 11:59 pm
On Thursday May 19th, the Linsmore Tavern (1298 Danforth Ave) is extremely excited to welcome back one of our absolute favourite bands in the world who all happen to be from the neighbourhood, TRAINWRECK! TRAINWRECK have played a ton of great shows over the years at the Linsmore and it’s always a packed house when they hit the stage! With an incredibly fun set-list that has everyone up and dancing, it’s always a party when TRAINWRECK rolls into the Linsmore Tavern! If you are looking for a good party, mark this date down on the calendar because it’s guaranteed to be a great night! This show is also a fundraiser with proceeds going towards local music schools. There will be lots of specials guest and also opening the night will be performed by The Community! This is going to be an incredible party on a Thursday kicking into the long weekend in style!
TRAINWRECK is a high-energy, 10-piece party band based in Toronto’s East End, guaranteed to get people dancing with it’s eclectic mix of rock, pop & soul covers, and funky originals. Fronted by stage & screen actor Rick Miller, TRAINWRECK’s been rolling between Montreal and Toronto for the last 8 years, playing bars, festivals, private parties, fundraisers, corporate and community events. Our aim is to delight and surprise with every song we play, from Elvis (Presley) to Elvis (Costello), from Gabriel to Gaga, from ABBA to ZAPPA – a ‘wrecking’ good time!
TRAINWRECK features Miller on lead vocals, guitar and harmonica, Pete Gray on organ and keys, Don Macdonald on bass, guitar and banjo, Tait Sala on bass, Mark Franco on drums, and Robin Vaughan on lead guitar & tenor sax, Stephanie Baptist (vocals & glockenspiel), Ali Squires (vocals), Karen Dalton (vocals & alto sax), and Victoria Wickett (trumpet)
The Community is a band that is foremost about bringing people together to perform and enjoy live music. Its origins began with a request to put together a band to play at a school event. The school event is now in its 7th year and The Community has seen many variations of students, teachers, administrators. parents and alumni join in the fun! From that beginning the band has branched out to include new members from other communities, but still continues to share that core philosophy which is the love of playing live music together!
The line up consists of: TRAINWRECK founding member Pete Gray on Keyboards, Jeff Hill on Lead Vocals, Craig Parkinson on Drums, Ted Clarke on Bass , Nick Morris and Markku Vesanen on lead guitar and also from TRAINWRECK Robin Vaughan on Sax, Guitar and Vocals.
The Community are a creative cover band. They hope to play all your favourites, but maybe in a slightly different way than you’ve heard before. Come out and listen, sing along and dance to the music of The Community.
The show will start at 8pm, tickets are $10 in advance, $15 at the door! Buy tickets www.linsmoretavern.com
Proceeds for this show will be going to USchool!
<!--