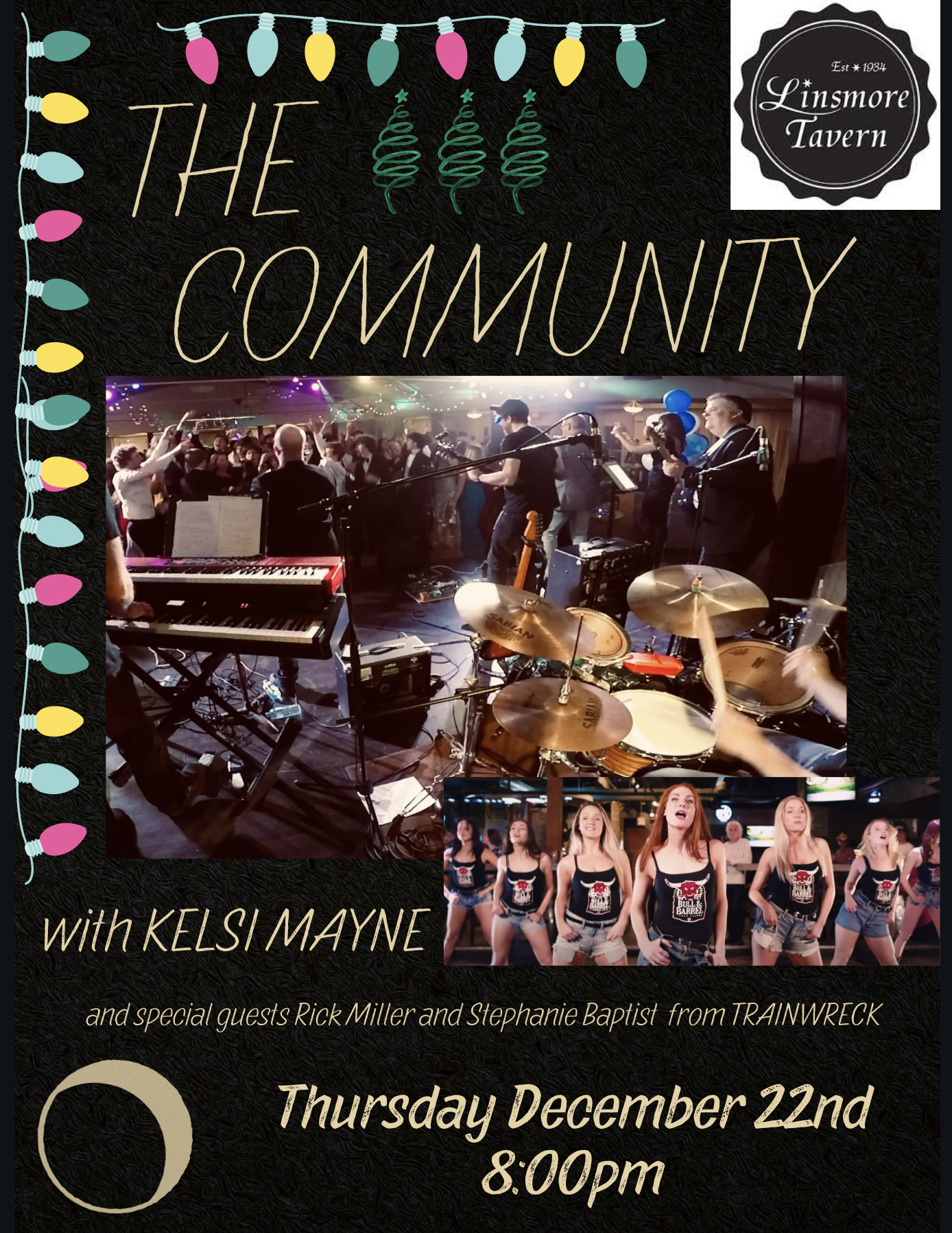 We had this show last month and it was so much fun for everyone involved including the capacity audience, that we decided to have it one more time right before Christmas! One of the great local bands from the neighbourhood returns to the Linsmore Tavern (1298 Danforth Ave) on Thursday December 22nd! The Community makes their return and they are bringing with them as a special guest, the emerging and super talented, Kelsi Mayne! This is going to be a really fun event with some really fun cover songs from The Community! Also performing a special acoustic set will be Rick Miller and Stephanie Baptist from Trainwreck!

Music has always figured prominently in Rick Miller’s work, particularly through his singing. His remarkably versatile voice has led him to play lead roles in music-based films, and musical theatre productions around the world. Early in his career, he honed his skills as a vocal impersonator, and musical parodies and sketches became trademarks of his solo shows. Lately, he has been fronting a 10-piece party band called TRAINWRECK, in which he sings lead, and plays guitar and harmonica alongside his life partner Stephanie Baptist. He also curates a bi-annual cabaret called Rick Miller & Friends, in which he showcases some of the original music and songs he has written over the past 20 years.

On the heels of main-stage performances at Boots and Hearts and Alberta’s Big Valley Jamboree, and high-profile gigs such as singing national anthems for the Toronto Blue Jays … Kelsi dusted off her nursing degree to join the front-line fight against COVID-19.

“I want to the thank my fans for their patience during these trying times,” Kelsi says. “Meaningful, new music is coming. But the pandemic has made the process more deliberate.”

Fortunately, Kelsi’s music has staying power. The title track of her debut album, “As I Go,” continues to inspire. Clips of the video (also produced and edited by the multi-dimensional artist) have generated more than 4 million views on TikTok, making Kelsi the platform’s most popular Canadian country performer.

Her previous single, “Takin’ U Home,” has more than 460k Spotify spins alone, was the #1 download by an independent artist on DMDS, and garnered national attention on Rogers Hometown Hockey Tour and the Canadian Sports Hall of Fame ceremony on CTV. Notably, the song was also used to promote Humane Society adoption programs — another cause close to Kelsi’s heart.

Her dynamism propelled her to the finals of SiriusXM’s nationwide “Top of the Country” contest and CMAOntario industry nominations in 2020 for “Rising Star” and 2021 “Female Artist of the Year”. Meanwhile, diehard fans can see Kelsi’s acting talents on display in Willa, an adaptation of the Stephen King story of the same name.

The strength of Kelsi’s songwriting and performing have made her a beneficiary of FACTOR Canada, SOCAN Foundation, CCMA Nashville Songwriters Association International, CMAOntario, Ontario Musicians Cooperative Inc., and the Ontario Arts Council.

The show starts at 7:30pm, there’s no cover, but arrive early because the Linsmore will fill up!