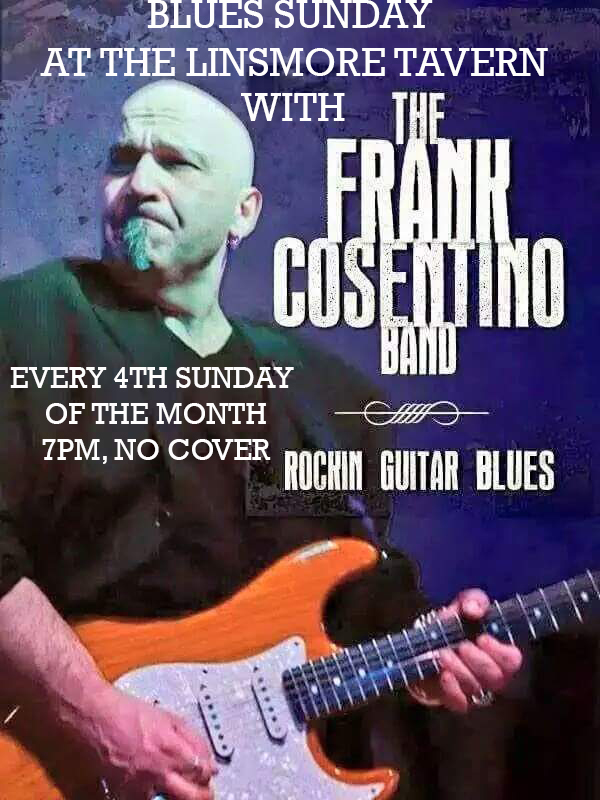 We can’t wait to welcome back for the very first time in more than two years for Molson Canadian Blues Sunday Series, the Frank Cosentino Band on Sunday April 24th! Only the best in blues music when it comes to Blues Sunday at the Linsmore and that is definitely the case on for every 4th Sunday at the month with The Frank Consentino Band! Frank Consentino is a Blues Guitar Virtuoso who was also inducted into The Blues Hall of Fame in 2017! Franks has been touring the world for more than 30 years performing blues music and to be a Master Blues Artist, you have to have some serious chops. Influenced by Jimi Hendrix, Stevie Ray Vaughan and the 3 Kings (Freddie King, Albert King, B B King), you will absolutely love Franks guitar driven blues! This is going to be a really special Blues Sunday that you can’t afford to miss! The show starts at 7pm, theres no cover and cheap pints from our sponsor Molson Canadian!
Guitarist Frank Cosentino has been on the Canadian music scene since the early 1980’s. He has fronted his on blues/rock band since 1989, and since then he has released four full-length albums. His latest album ‘Straight, No Chaser!’ was released in the summer of 2012!
Guitar has been in Frank’s life since the age of five. Everything changed after seeing Jimi Hendrix live at his infamous 1968 Toronto show! It was the sound coming from this larger then life guitarist’s hands that some would say was a religious awakening musically for Frank.
For the past 30 years Frank has been a gigging machine, with over tens of thousands concerts to his credit! Frank has been known to perform over 250 dates a year with many toures throughout Canada and the USA. With his many endorsements, Frank has also been involved with clinic tours and many NAMM show (Anaheim, CA) appearances.
Frank has also had the opportunity to share the stage with some of the world’s greatest musicians in blues and beyond. Legends like James Cotton, Buddy Guy, Johnny Winter, Jeff Healy, Robben Ford, Duke Robillard, guitarist Phil X (Bon Jovi, Alice Cooper)…..and some of the new blood like guitarists Phillip Sayce, Anthony Gomes and Sue Foley too name a few.
Discography:
The Cos – Cool Blue Records 1994
Open Up And Say Wah! – Cool Blue Records 1999
Unfinished Business – Cool Blue Records 2001
The Blues – Cool Blue Records 2004
Endorsements:
Seymour Duncan pickups
Dean Markley Strings
ZS Thomas Guitars (signature guitar – The “Cosentinocaster”)
Carparelli Guitars
Mack Amps
Platone Amps
VL Effects
Lava Cables
Amp Clamps
String stretcher
Rocky Mountain Slide Company